VACCINE WORKS FOR ALL 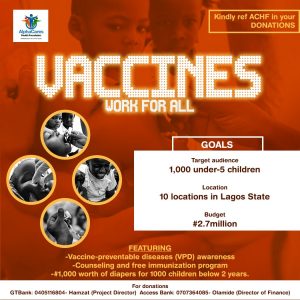 Diseases such as pneumonia, meningitis, and measles which have been almost eliminated in several countries, including African countries, still have high incidences and mortality rates in Nigeria. Less than half (47%) of children now get the vaccination that protects them against diphtheria, tetanus and pertussis (whooping cough) called DPT. While child vaccinations are increasing in other parts of the world, and most countries have DPT3 immunisation rates above 80% which confers herd immunity, the proportion of children who are fully immunized children in Nigeria in the past two decades has never really reached optimal levels, but rather, has fallen despite ‘massive’ investments. (BEN C. ANYENE: AJHE-2014- Vol 3 (1):0002) 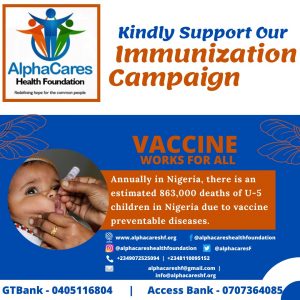 Reports have indicated that the available vaccines today could prevent an estimated 25% deaths of children under the age of 5 (Adedokun et al. BMC Public Health (2017) 17:236). It is in view of this that the World Health Organization (WHO) and United Nations Children’s Fund (UNICEF) developed the Global Immunization Vision and Strategy with the objectives of increasing the number of children being immunized against preventable diseases, incorporating other interventions with immunization and managing immunization programmes based on global interdependence (Immunization, Vaccines and Biological: Global Immunization Vision and Strategy). This effort was also mirrored in Nigeria with the Expanded Programme on Immunization (EPI). 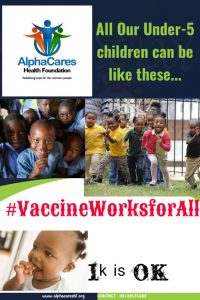 The vision of EPI in Nigeria is to improve the health of Nigerian children by eradicating all the six killer diseases, which are polio, measles, diphtheria, whooping cough, tuberculosis, and yellow fever. Between 1985 and 1990, as outlined in the national health plan for that period, the objectives of EPI were to strengthen immunization, accelerate disease control and introduce new vaccines, relevant technologies and tools. (Endurance A. Ophori et al: Tropical Medicine and Health Vol. 42 No.2, 2014, 67–75) 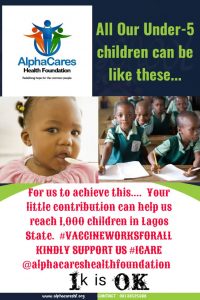 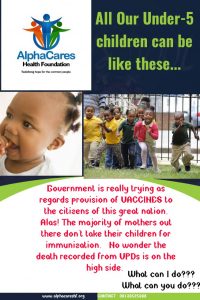 Globally, vaccination is recognized as a cost-effective public health measure for decreasing childhood mortality and morbidity (WHO, UNICEF, World Bank. State of the world’s vaccines and immunization. Geneva: World Health Organization; 2009.1). Strategies which improve the uptake of vaccination include ‘supply-side’ interventions, such as ensuring a constant supply of potent vaccines, strong health systems to ensure delivery of these vaccines and sufficient health personnel to administer vaccines (Hinman A. Eradication of vaccine-preventable diseases. Annu Rev Public Health. 1999; 20:211–29.); and ‘demand side’ components which focus on individual and household determinants of health-seeking behaviours, such as building the knowledge base of individuals to utilise vaccination programmes to their advantage. Addressing vaccine hesitancy linked to parental knowledge, understanding, attitudes, beliefs, and behaviours is an important example of a demand-side component. (Muñoz DC, Llamas LM, Bosch-Capblanch X. Exposing concerns about vaccination in low-and middle-income countries: a systematic review. Int J Public Health. 2015;60(7):767–80.) 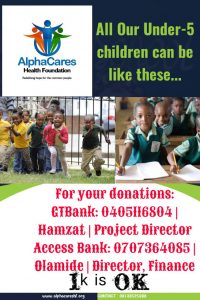 In the past two decades, the scope of immunization has expanded significantly as new vaccines and delivery technologies have been introduced into routine immunization programmes worldwide. The same period has witnessed a proliferation of actors in the global arena that promote immunization and help vaccines reach an ever-larger number of children, adolescents and adults. The horizon is filled with prospects of new vaccines, delivery technologies and stronger systems.

According to Independent Consultant- Women Advocate, Mrs Halimah Ben-Umar, she noted that despite various initiatives and campaigns, immunization coverage in Nigeria, has remained low, thereby contributing to high mortality and morbidity among children. Important reasons for this low coverage are problems arising from knowledge, attitude, and perceptions regarding vaccination.

While some parents cite issues such as long distance from immunization centres, insufficient vaccines, religious superstitions, and side effects as reasons for not obtaining immunization for their children, others accept immunization and suggest that the government should continue to create awareness on the benefits of immunization. In exploring the reasons for poor uptake/rejection of immunization, she noted that in general, the community response is that of a misconception that immunization is a ploy by outsiders (enemies of Islam) to reduce the Muslim population through fortification of the vaccine with contraceptives. 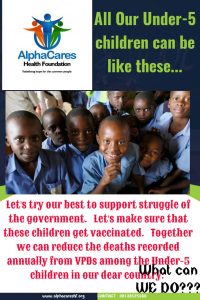 She emphasized the importance of advocacy and communication in the struggle to eradicate polio stating that the health system needs to develop more advocacy tools, which will help to engage with families, record reasons for refusal, understand the complexities of multiple community identities, and overcome deeply rooted social and cultural barriers. (Immunization in Nigeria: Accountability, Attitude, Economics & Politics)

Overall, it is strongly believed that if resources are pulled together and support provided to the relevance agencies on prevention of VPDs via public and community education and enlightenment, the gospel of vaccination will be well appreciated by the parents and in turn make their children available for routine immunization, and it is upon this background that we have decided to embark on this noble project, having your worthy organization as our partner-in-progress.

How Activity will contribute to project objectives: Community education programs will increase awareness and important of immunization for under 5 children to prevent VPDs in Lagos State and Nigeria in General.