LATE DINNER: GOOD OR BAD FOR OUR HEALTH?

With increase in the number of obese patients, we are beginning to hear more and more about the importance of avoiding eating late at night. Eating late at night is often blamed for obesity, though it can also contribute to fluctuations in your sleep cycle and changes in the number of times you need to use the bathroom during the night. If you must eat late, choose foods that are appropriate, such as those low in calories and rich in whole grains.

One of the most important reasons why you should avoid eating late at night is due to the possible risk of weight gain associated with this habit. While many people are aware of the fact that eating late may contribute to weight gain, they are not always aware of how this can happen. Increases in your body weight during this period of time are caused primarily by changes in the rate at which your metabolism functions during sleeping versus waking hours. When you eat during the day, you are relatively active, and your metabolism is functioning rapidly. In contrast, during sleep, your metabolism has slowed quite a bit—and because of this, the food that you have recently eaten will be metabolized and digested at a much slower rate. This contributes to increases in body weight, and possible obesity. People who are trying to lose weight should avoid eating at least two hours before they go to bed.

Another important reason why you may want to avoid eating late is due to the effect it can have on your sleep cycle. Research has found that the digestive process can have serious implications on your sleep cycle, causing you to wake up more often, and have a harder time falling asleep in the first place.

One last reason why you may want to avoid eating late at night is that doing so may increase the number of times that you need to get up to use the restroom during the night. Eating late at night will result in food being digested during your sleeping hours—and because of this; you may need to wake up to eliminate the waste products. 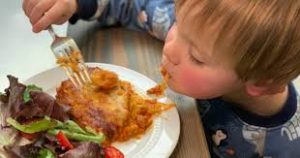 GOOD THINGS HERE MY READERS AND LOVERS OF LATE DINNER

There’s no need to deny yourself a late-night snack if you’re feeling hungry, but you still have to think smart when it comes to eating late. Instead of just diving into the nearest, tastiest-looking item in your fridge, here are suggestions on what you can eat that will not have negative effects on your health.

Your well being is our major concern.