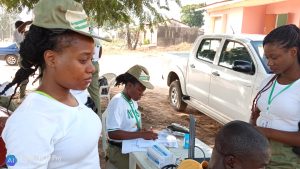 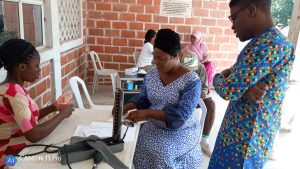 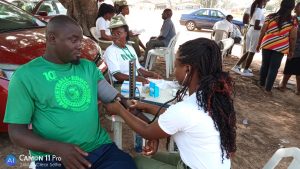 The Founder of the Foundation who is also currently serving in the camp, Dr Hamzat Zaheed said he organized the screening for staffs after the live broadcast on the 14th of this month to sensitize people about the diabetes mellitus in commemoration of World Diabetes Day 2019.‎

‎
He added that same exercise was held in Lagos State among the staff of Senior High School Ikeja where 50 of them were screened for Diabetes Mellitus.

He added that the staffs were the target because both in the school and at the camp, they have been acting as parents and guidance to the children under their care. And it is sometimes worrisome that in dedicating their time to take care of others’ children they have little or no time to check on their state of health, hence the need to bring the awareness and screening to their various places of work.

He further reiterated that the screening would help them know the state of their health and with Doctors’ advice and counseling, they would be able to live a better life devoid of risk of diabetes and other comorbidities like hypertension and obesity.

He expressed his appreciation to the Niger State coordinator of NYSC, Mrs Funmilayo Ajayi for the permission granted his Foundation, and the head of camp clinic, Hajia Aisha Adamu for not turning his request down. Also, the medical team led by the CMD, Dr Jombo for the support.

He also showed gratitude to the partner in Lagos State, LASUCOM MUSLIM ALUMNI and the entire team of ALPHACARES HEALTH FOUNDATION for believing in his vision of bringing better and accessible health care to everyone irrespective of tribes or religious affliation.