ERADICATION OF VACCINE-PREVENTABLE DISEASES: IT STARTS WITH YOU. 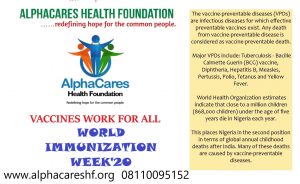 You must have heard of smallpox, right? Permit me to take you back through its history lane. Small pox used to be a highly contagious, disfiguring and often deadly disease. During the 20th century, it is estimated that small pox was responsible for 300-500 million deaths globally! As early as 1967, the WHO estimated that 15 million people contracted the disease and that 2 million people died in that year. These weren’t just numbers, they were full blown humans, just like you and me. But guess what? In the year 1979, WHO certified 100% global eradication of small pox. It wasn’t through magic. It was achieved through IMMUNIZATION. Imagine 2 million people dying every year since 1967. Now, that’s unimaginable.

Simply put, Immunization is the process of making someone unable to contract a disease, typically by the administration of a vaccine.

A vaccine is a biologically prepared antigenic agent to be administered by injection or orally, that provides either passive or active immunity to a particular preventable infectious disease.  A vaccine typically contains an agent that resembles a disease-causing microorganism and is often made from weakened or killed forms of the microbe, its toxins, or one of its surface proteins. This agent in turn stimulates the body’s immune system to recognize the agent as a threat, destroy it, and to further recognize and destroy any of the microorganisms associated with that agent that it may encounter in the future.

Simply put, a vaccine prepares your immune system to help you combat likely infections that have not occurred but may likely occur in the future.

MISCONCEPTION 1:”Diseases had already begun to disappear before vaccines were introduced, because of better hygiene and sanitation”.

FACT: Undoubtedly, improved socio-economic conditions, better nutrition, less crowded living conditions, development of antibiotics and other treatment and the likes have decreased morbidity and mortality to a large extent. Nevertheless, the impact will be significantly felt if vaccination was to be eliminated.

For example, the real permanent drop in measles coincided with the licensure and wide use of measles vaccine beginning in 1963. It wasn’t a mere coincidence.

MISCONCEPTION 2: “The majority of people who get disease have been vaccinated”

FACT: Truly, no vaccine is 100% effective. To make vaccines safer than the disease, the bacteria or virus is killed or weakened (attenuated). For reasons related to the individual, not all vaccinated persons develop immunity. Most routine childhood vaccines are effective for 85% to 95% of recipients. However, this is not enough reason for vaccines to be scrapped.

MISCONCEPTION 3: “Giving a child multiple vaccination for different diseases at the same time increases the risk of harmful side effects and can overload the immune system”.

FACT: Children are exposed to many foreign antigens every day. Eating food introduces new bacteria into the body, and numerous bacteria live in the mouth and nose, exposing the immune system to still more antigens. In the face of these normal events, it seems unlikely that the number of separate antigens contained in childhood vaccines . . . would represent an appreciable added burden on the immune system.

MISCONCEPTION 4: “Vaccines cause many harmful side effects, illnesses, and even death – not to mention possible long-term effects we don’t even know about.”

FACT: Vaccines are actually very safe, despite implications to the contrary in many anti-vaccine publications. Most vaccine adverse events are MINOR AND TEMPORARY, such as a sore arm or mild fever. These can often be controlled by taking paracetamol after vaccination. More serious adverse events occur rarely (on the order of one per thousands to one per millions of doses) and some are so rare that risk cannot be accurately assessed. As for vaccines causing death, again so few deaths can plausibly be attributed to vaccines that it is hard to assess the risk statistically.

MISCONCEPTION 5: “Vaccine-preventable diseases have been virtually eliminated from my country, so there is no need for my child to be vaccinated.”

It is true that vaccination has enabled us to reduce most vaccine-preventable diseases to very low levels in many countries. However, some of them are still quite prevalent — EVEN EPIDEMIC — in other parts of the world. Travellers can unknowingly bring these diseases into any country, and if the community were not protected by vaccinations, these diseases could quickly spread throughout the population, causing epidemics there.

COMMON VACCINE PREVENTABLE DISEASES: The most common and serious vaccine preventable diseases tracked by the World Health Organisation include;

In summary, immunization is a means of saving lives from deadly communicable and contagious diseases that are preventable.  No child should be restricted from immunization. This means vaccines should be easily accessible, free and affordable to all, regardless of social class or geographical location.  The cycle of the diseases must be broken and fully eradicated in order to improve quality of life. Remember, 2020 World Immunization Week theme; #VaccinesWork for ALL.

NOTE: AlphaCares Health Foundation is not only into awareness on immunization but health in general. And “health is defined as state of complete physical, mental and social well-being and not merely the absence of disease or infirmity”. – World Health Organization. WHO assert that physical and mental well-being is a human right, enabling a life without limitation or restriction.

3 Replies to “ERADICATION OF VACCINE-PREVENTABLE DISEASES: IT STARTS WITH YOU.”